Pumpkins - Don't waste the flesh when you're carving this year!

The Halloween season is upon us, and to all those getting out the fake spiders and cobwebs, and donning their scary outfits, when it comes to pumpkin carving, don’t throw away the flesh or seeds, and here are a few reasons why…

Pumpkins are the most popular of the winter squash family, and like many of their cousins, they have many health benefits:


1.       Good for the peepers – according to the National Institute of Health, a cup of cooked, mashed pumpkin contains more than 200% of your recommended daily intake of vitamin A, which aids vision, particularly in dim light. Pumpkins, similarly to carrots, are also rich in beta carotene, which give them their rich orange colour, and are good for night vision.


2.       Great source of fibre – at 3 grams of fibre per cup it is rich in fibre, and can aid in prevention of certain cancers, and help with healthy digestion and regular bowel movements


3.       Low calorie – at only 49 calories per cup, it can be a great low calorie and sweet alternative to mashed potato for those watching their weight. It is also great for bulking up stews and casseroles, without totting up the calories, keeping you fuller for longer!


4.       Pumpkin seeds for a healthy heart – Pumpkin seeds are naturally rich in phytosterols that have been shown to reduce levels of the harmful cholesterol (LDL) in the blood. (Read blog http://pollytaylor2.blogspot.co.uk/2013/08/cholesterol-good-and-bad.html)


5.       May reduce cancer risk – Like their fellow orange veggies, they are rich in beta-carotene, which studies have shown to play a role in cancer prevention according to the National Cancer Institute. In addition, food sources of beta-carotene prove to be more effective than a pill-form supplement


7.       Mood boosting properties – pumpkin seeds are rich in the amino acid tryptophan, which has been show in some studies to boost the production of serotonin in the brain, a chemical associated with good moods


8.       Pumpkin can boost immune system – pumpkin is rich in Vitamin C, which when consumed in large amounts has been shown to ‘ward off colds’


9.       Pumpkin can help after a hard workout – bananas tend to be known as ‘nature’s energy bar’ being rich in natural sugars, water and potassium. However a cup of cooked pumpkin has more of the refuelling nutrient potassium at 564 milligrams per cup, compared to a banana’s 422 milligrams per cup.


So what to do with the insides from your pumpkins? Well here are a few tasty recipes to try, ranging from a little bit of effort, to those feeling a little lazy, but don’t like to waste food.

1.       Place the pumpkin in a large saucepan, cover with water and bring to the boil, cover with a lid and simmer for fifteen minutes until soft. Drain water and allow to cool


2.       Heat oven to 180 degrees, roll out the pastry onto a lightly floured surface and use it line a 22cm loose bottomed pastry tin, chill for fifteen minutes. Line the pastry with baking parchment and fill with baking beans, and then bake for fifteen minutes. Remove the beans and parchment and bake for a further 10 minutes until golden brown. Remove from oven and allow to cool slightly.


3.       Increase oven to 220 degrees. Push the cooked pumpkin through a sieve into a large bowl. In a separate bowl, combine the sugar, salt, nutmeg and half the cinnamon. Mix in the beaten eggs, melted butter and milk, then add the pumpkin puree and stir to combine.


4.       Pour into the tart shell and cook for ten minutes, then reduce the temperature to 180 degrees and continue to bake for 35-40 minutes or until filling has just set.


5.       Leave to cool and then take out of tin. Mix the remaining cinnamon and icing sugar together and dust the top of the pie with it. Serve chilled. 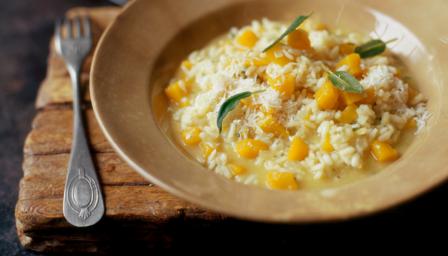 
2.       While the pumpkin is roasting, make the risotto. Heat the butter in a pan over a medium heat, add the garlic and spring onions. Cook for a few minutes, then add the rice and cumin and stir well to coat with the buttery mix.


3.       Add the stock in gradually, allowing the rice to soak up the stock. This should take around 20 minutes